Rochford Welcomes the Women’s Tour 2021 as it cycles through the District. 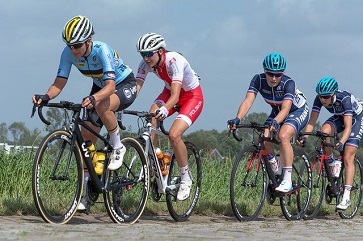 Residents within the Rochford District will have the opportunity to watch and enjoy the Women’s Tour on Thursday 7th of October as a number of areas are included in stage four of the tour.
The Women’s Tour is the UK’s most prestigious women’s cycling race and is part of the UCI’s Women’s WorldTour, which is a season-long series comprising the world’s biggest and most prestigious races. It’s an event offering a social agenda on the promotion of sporting participation and healthy living, focusing on young girls.
The 2019 race attracted over 230,000 spectators to the roadside across the six stages, and now residents of the Rochford District can spectate in this popular and prestigious race. The defending champion from the 2019 Women’s Tour is British rider Lizzie Deignan, who has confirmed she returning to compete as well as other riders who are Olympic, world and national champions!
Stage four will see riders set off from East Beach in Shoeburyness before heading through several areas of the Rochford District including Great Wakering, Shopland, Rochford, Stambridge, Canewdon, Ashingdon, Hullbridge and Rayleigh.
The Stage is scheduled to finish between 2pm and 3pm along the seafront in Southend outside The Arches Cafes. Our leisure operator Fusion Lifestyle will be represented at the finish where you can find out more about Clements Hall and Rayleigh Leisure Centre, as well as the free 3 day pass they currently have on offer (further information and T&Cs available directly from both Centres).
Cllr Mike Webb, portfolio holder for Commercial, Business, Local Economy and Leisure, said “We are honoured and delighted that the prestigious Women’s Tour will take place in so many areas within the Rochford District. This is a wonderful opportunity for residents to be able to witness some of the best female riders in the world, including Olympic and World champions, as well as stars of the future.”
Anybody wishing to see what time the stage will pass by can use the stage timetable [ https://www.womenstour.co.uk/stage-four-timetable/  ]. A rolling road closure will be in operation; details on this can be found here [ https://www.womenstour.co.uk/race/road-closures/  ].
Further information on stage four of the Women’s Tour can be found on the event organisers webpage. [ https://www.womenstour.co.uk/stages/stage-4/  ]